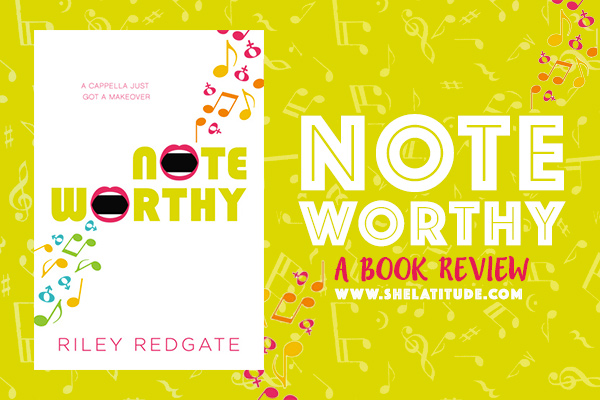 It’s the start of Jordan Sun’s junior year at the Kensington-Blaine Boarding School for the Performing Arts. Unfortunately, she’s an Alto 2, which—in the musical theatre world—is sort of like being a vulture in the wild: She has a spot in the ecosystem, but nobody’s falling over themselves to express their appreciation. So it’s no surprise when she gets shut out of the fall musical for the third year straight.

Then the school gets a mass email: A spot has opened up in the Sharpshooters, Kensington’s elite a cappella octet. Worshiped… revered… all male. Desperate to prove herself, Jordan auditions in her most convincing drag, and it turns out that Jordan Sun, Tenor 1, is exactly what the Sharps are looking for.

Early last year, Riley Redgate impressed me with Seven Ways We Lie, a book with not two, not three, but seven first-person point of views. Entertaining, quirky and surprisingly original, SWWL was very much a solid debut, which is why I have quite high expectations of Redgate’s follow-up. Enter Noteworthy.

This book is the story of Jordan Sun, a Chinese-American teenage girl who disguises herself as a boy to join the Sharpshooters, her school’s a cappella group. While juggling her new persona, Jordan also has to deal with her family’s financial issues as well as her feelings of isolation and her not being able to fit in.  As with books where a protagonist goes undercover, though, the disguise only works for a period of time and once people find out, the consequences are dire.

“The world had told me what becoming a man looked like: conquering one thing or another, one way or another. Becoming a woman, as far as they’d told us, looked like blood.”

In that vein, Noteworthy might not be remarkably original (it’s even somewhat predictable), but Redgate managed to put a new spin on an old tale and keep me entertained. For me, this spin was in the characters — the Sharpshooters were a diverse, clashing group of races, cultures, personalities, beliefs and values, and each and every one of their interactions captured me. They’re also remarkably passionate about music and singing, which… honestly? Kind of makes them nerds. Lovable nerds.

Jordan herself was an entertaining protagonist, and I enjoyed being in her head and experiencing the world through her eyes. The nature of her action — lying to a whole group of people by disguising her gender— is inherently flawed, but she does struggle with guilt quite a bit and doesn’t justify herself when she makes mistakes. I also appreciate how her disguise makes her question tougher issues such as trans visibility, queerness, and sexuality. I hadn’t been expecting that, and I think she was developed very, very well.

“It’s the greatest strength to know your weaknesses. It just means you have a question to answer: How hard will you work to get what you want? And that’s the heart of it: from your career, from your time here, from everything, really — what do you want?”

The characters in this book deal with a lot of issues, from things like race, culture, sexuality and religion, to the more concrete, direct things like financial issues and parental issues. What I appreciate is how naturally these themes are explored, how casual and true and real they are in the moment. I never really felt like I was being forced into thinking a certain way or that I was being preached at.

Redgate’s writing was fast-paced and light, with just the right amount of description, dialogue, and narrative. It was also occasionally humorous and did not hesitate to poke fun at itself. The only reason why I’m not giving it five full stars is because there were some little things that I think didn’t sit as naturally as I would have liked, but overall, it was still a delight to read. Some books fight with you and rebel against you even as you try your best to fall into the story, but not Noteworthy.

* I received a copy of NOTEWORTHY from the publisher via NetGalley in exchange for an honest review. Quotes might differ in the final publication.