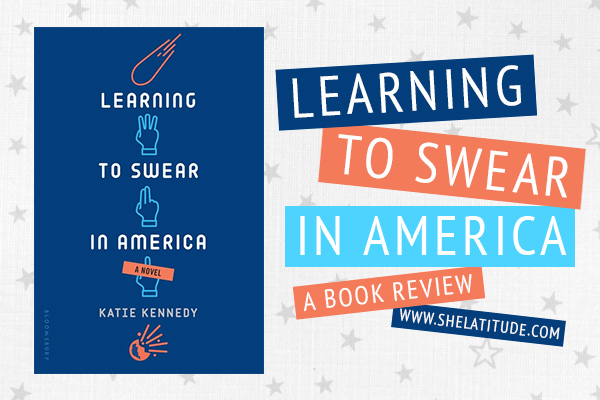 An asteroid is hurtling toward Earth. A big, bad one. Yuri, a physicist prodigy from Russia, has been called to NASA as they calculate a plan to avoid disaster. He knows how to stop the asteroid: his research in antimatter will probably win him a Nobel prize–if there’s ever another Nobel prize awarded.

But Yuri’s 17, and having a hard time making older, stodgy physicists listen to him. Then he meets Dovie, who lives like a normal teenager, oblivious to the impending doom.

Being with her, on the adventures she plans when he’s not at NASA, Yuri catches a glimpse of what it means to save the world and save a life worth living.

In Learning to Swear in America, seventeen-year-old physics genius Yuri Strelnikov is sent from Russia to the USA to help them stop a big, bad asteroid meant to destroy parts of the continent. He’s aloof, he’s bad with people, and he’s honestly a little bit emotionally constipated — my type of protagonist for sure, if you see the characters I loved and rooted for when I was younger. 😂

Yuri deals with many things in this book. The asteroid plays some part, yes, but this book is more about his inability to connect with the world around him. His mum is cold and detached. His seniors at NASA look down on him because he’s young. He can’t make friends with teenagers because he’s never been one. He experiences culture shock and doesn’t speak English with 100% fluency. Despite all that, though, I actually found him really endearing.

“I brought some clothes.” She pointed to a bundle in the backseat. “I didn’t think you had anything casual.”

“I’m wearing blue shirt and no tie,” he protested.

The supporting characters are also really, really endearing. Dovie, the love interest, is slightly Manic Pixie Dream Girl, but for some reason I loved her enough to not mind that, perhaps because she’s got the best family ever. Her mum is super sweet and welcoming, her dad nice, and her brother, Lennon, just has a great personality. Bonus point: he’s disabled, but it’s not the centre of his identity, and it was dealt with in a very refreshing way.

Now, to fully enjoy this book, you do have to suspend a bit of disbelief because the premise isn’t exactly realistic. An asteroid is hurtling down to earth, and the fate of humankind — well, parts of humankind — is in the hands of our seventeen-year-old protagonist! If you can get past that and just not think about the implausibility, however, the story has a lot of heart. 💗

“Gonna be a damn lot of Newtons per square centimeter,” Yuri said.

“You shoulda gone with ‘hell’ in that situation, but you’re improving,” Lennon said.

Unfortunately, nearing the end, the book took a turn for the worse. Yuri’s solution for his other, non-asteroid big problem just didn’t make any sense to me as there were simply easier, more obvious ways to solve it. It was also very abrupt and even a little bit open that I turned that final page feeling just a tad dissatisfied.

That aside, though, Learning to Swear in America is honestly just very charming. Kennedy’s writing style was funny, light-hearted, and very readable, and it’s in the dialogue that the humour truly shines — there’s gold in there. Also, for a book with a catastrophic premise, it’s nowhere as serious as I expected it to be and overall reads a bit like the YA version of The Martian, which is just great. 💙