Hello and welcome to another episode of Top Ten Tuesday, you guys! I think this one marks my 52nd one, so hey, that’s a whole year of TTTs. This week’s theme is books you read because of a recommendation.

I’ll admit: I’m actually really bad at reading recommended books. Usually when someone tells me I should read a book because it seems to be my kind of thing, I have every intention to, but I’m a HUGE mood reader so I always end up putting that book aside and then forgetting about it. Because of that, while half of these books were in fact recommended to me, the other half are basically books I’ve read because I’ve read positive reviews. 😛

Hannah Wells has finally found someone who turns her on. But while she might be confident in every other area of her life, she’s carting around a full set of baggage when it comes to sex and seduction. If she wants to get her crush’s attention, she’ll have to step out of her comfort zone and make him take notice…even if it means tutoring the annoying, childish, cocky captain of the hockey team in exchange for a pretend date.

All Garrett Graham has ever wanted is to play professional hockey after graduation, but his plummeting GPA is threatening everything he’s worked so hard for. If helping a sarcastic brunette make another guy jealous will help him secure his position on the team, he’s all for it. But when one unexpected kiss leads to the wildest sex of both their lives, it doesn’t take long for Garrett to realize that pretend isn’t going to cut it. Now he just has to convince Hannah that the man she wants looks a lot like him.

VERDICT: ★★★★☆ | Basically YES. It was Lois’ review that convinced me to read this, and I absolutely loved it. 😛

Lady Jane Grey, sixteen, is about to be married to a total stranger—and caught up in an insidious plot to rob her cousin, King Edward, of his throne. But that’s the least of Jane’s problems. She’s about to become Queen of England.

VERDICT: ★★★★☆ | I had no intention of picking up this book until reviews started popping up and literally each and every one of them was positive! I don’t actually remember whose review was the deciding factor for me, but this book was gooood.

3) I’ll Meet You There – Heather Demetrios

If Skylar Evans were a typical Creek View girl, her future would involve a double-wide trailer, a baby on her hip, and the graveyard shift at Taco Bell. But after graduation, the only thing separating Skylar from art school is three months of summer…until Skylar’s mother loses her job, and Skylar realizes her dreams may be slipping out of reach.

Josh had a different escape route: the Marines. But after losing his leg in Afghanistan, he returns home, a shell of the cocksure boy he used to be.

What brings Skylar and Josh together is working at the Paradise—a quirky motel off California’s Highway 99. Despite their differences, their shared isolation turns into an unexpected friendship and, soon, something deeper.

VERDICT: ★★★★☆ | Honestly can’t remember but I wouldn’t have picked this up if it weren’t for the reviews! Neither the blurb nor the cover captured my attention, but the story definitely did.

Elsie Porter is an average twentysomething and yet what happens to her is anything but ordinary. On a rainy New Year’s Day, she heads out to pick up a pizza for one. She isn’t expecting to see anyone else in the shop, much less the adorable and charming Ben Ross. Their chemistry is instant and electric. Ben cannot even wait twenty-four hours before asking to see her again. Within weeks, the two are head over heels in love. By May, they’ve eloped.

Only nine days later, Ben is out riding his bike when he is hit by a truck and killed on impact. Elsie hears the sirens outside her apartment, but by the time she gets downstairs, he has already been whisked off to the emergency room. At the hospital, she must face Susan, the mother-in-law she has never met and who doesn’t even know Elsie exists.

VERDICT: ★★★☆☆ | It was CW whose review convinced me to pick this book up — and it was indeed very, very thought-provoking; I just didn’t connect with the characters almost at all.

Aristotle is an angry teen with a brother in prison. Dante is a know-it-all who has an unusual way of looking at the world.

When the two meet at the swimming pool, they seem to have nothing in common. But as the loners start spending time together, they discover that they share a special friendship—the kind that changes lives and lasts a lifetime. And it is through this friendship that Ari and Dante will learn the most important truths about themselves and the kind of people they want to be.

6) To All the Boys I’ve Loved Before – Jenny Han

To All the Boys I’ve Loved Before is the story of Lara Jean, who has never openly admitted her crushes, but instead wrote each boy a letter about how she felt, sealed it, and hid it in a box under her bed.

But one day Lara Jean discovers that somehow her secret box of letters has been mailed, causing all her crushes from her past to confront her about the letters: her first kiss, the boy from summer camp, even her sister’s ex-boyfriend, Josh. As she learns to deal with her past loves face to face, Lara Jean discovers that something good may come out of these letters after all.

VERDICT: ★★★★☆ | Super cute, super fluffy. Has the best, girliest covers. I’m a bit skeptical about the third book, though, and I have my fingers firmly crossed.

The monster showed up after midnight. As they do.

But it isn’t the monster Conor’s been expecting. He’s been expecting the one from his nightmare, the one he’s had nearly every night since his mother started her treatments, the one with the darkness and the wind and the screaming…

This monster is something different, though. Something ancient, something wild. And it wants the most dangerous thing of all from Conor. It wants the truth.

VERDICT: ★★★★☆ | Just really, really sad. I know the movie’s coming out and all that but I don’t think I want to watch it — I’m not really in a crying mood and I know it will just break me.

Meet Karou. She fills her sketchbooks with monsters that may or may not be real, she’s prone to disappearing on mysterious “errands”, she speaks many languages – not all of them human – and her bright blue hair actually grows out of her head that color. Who is she? That is the question that haunts her, and she’s about to find out.

When beautiful, haunted Akiva fixes fiery eyes on her in an alley in Marrakesh, the result is blood and starlight, secrets unveiled, and a star-crossed love whose roots drink deep of a violent past. But will Karou live to regret learning the truth about herself?

VERDICT: ★★★☆☆ | This was recommended to me waaay before I started blogging. I loved the world-building, not so much the love story.

The Great Recession has shuffled Clay Jannon away from life as a San Francisco web-design drone and into the aisles of Mr. Penumbra’s 24-Hour Bookstore. But after a few days on the job, Clay discovers that the store is more curious than either its name or its gnomic owner might suggest. The bookstore’s secrets extend far beyond its walls.

VERDICT: ★★★☆☆ | Also recommended to me before I started blogging. It was a bit weird, but I love the quirkiness.

10) Girl Against the Universe – Paula Stokes 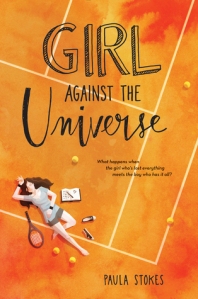 Maguire is bad luck. No matter how many charms she buys off the internet or good luck rituals she performs each morning, horrible things happen when Maguire is around. Like that time the rollercoaster jumped off its tracks. Or the time the house next door caught on fire. Or that time her brother, father, and uncle were all killed in a car crash—and Maguire walked away with barely a scratch.

It’s safest for Maguire to hide out in her room, where she can cause less damage and avoid meeting new people who she could hurt. But then she meets Jordy, an aspiring tennis star. Jordy is confident, talented, and lucky, and he’s convinced he can help Maguire break her unlucky streak. Maguire knows that the best thing she can do for Jordy is to stay away. But it turns out staying away is harder than she thought.

75 thoughts on “Top Ten Books That Were Recommended to Me”