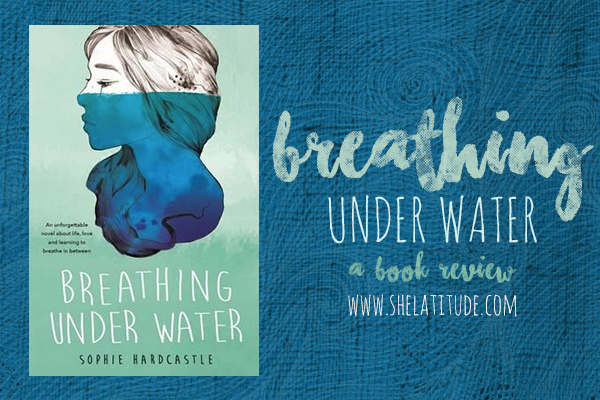 Nineteen minutes and eleven seconds separated us at birth. On the official documentation, he is older… although it really has nothing to do with age. What it really means is that I am, and have always been, second.

Ben and Grace Walker are twins. Growing up in a sleepy coastal town it was inevitable they’d surf. Always close, they hung out more than most brothers and sisters, surfing together for hours as the sun melted into the sea. At seventeen, Ben is a rising surf star, the golden son and the boy all the girls fall in love with. Beside him, Grace feels like she is a mere reflection of his light. In their last year of school, the world beckons, full of possibility. For Grace, finishing exams and kissing Harley Matthews is just the beginning.

Then, one day, the unthinkable. The sun sets at noon and suddenly everything that was safe and predictable is lost. And everything unravels.

Breathing Under Water was one of those books that I felt could have been really great but in reality failed in execution. This is a story written by an Australian author, so I was pretty immediately smitten when I received the ARC. With that cover and that blurb, I was expecting a character-driven story with great emotional impact and character growth — none of which I got from this book.

The story was really hard for me to get into, and even until the end, I can’t say for sure I ever found that reading momentum. Until perhaps the 50% mark, the plot seemed very thin to me, very shallow, very directionless. The blurb did spoil quite a bit of what was to take place, so I was expecting it to happen very, very soon… except it didn’t, and everything before that was very much part of setting the stage.

Hardcastle’s writing is quite flowery, descriptive and metaphorical — a bit much sometimes because it really slows down the pace of the story, and it doesn’t always make sense either why she has to describe certain things the way she does. Some examples from the ARC, this first one talking about Grace lacking a ‘womanly’ figure:

This one describing a friend working at a bakery:

She is a kaleidoscope, and as she works, I watch the way she refracts light, the glorious way in which colours bend and twist around her.

And this last one describing the weather:

Summer’s first northerly rips down the coast. Whitecaps race across the sea like wild horses across azure plains, and as the wind whips the coean, a fine salty mist rises above the earth.

Admittedly, some people might love her writing style, but I personally found it quite tedious, mostly because it does bog down the already-confusing-and-barely-there plot. The story also flits back and forth between past and present, and I quite often got lost because I wasn’t sure what was happening. Is it reality, or is it a daydream? Is it maybe Grace reflecting on events that have happened? It’s not always clear.

Speaking of Grace, I can’t say I really connected with her. Her conflict and growth relied entirely on her twin brother, Ben, who was the ‘better’ twin — more talented, more popular, more (seemingly) loved by their parents. This was good, though other than this aspect of Grace’s character, none of her choices and emotions resonated with me. Sometimes she would do things that I don’t understand too, like for example, there was this scene where she had a sleepover with a couple of friends and she just pretended to be asleep while everybody else was just chatting. I didn’t really understand why she did that and it was never clarified as well, so in the end I just dismissed it as a quirk.

None of the other characters left much of an impression to me either. Ben was always the Best Brother Ever. Mia was always the Cheerful, Lovable best friend. Jake was the Jerk with a Heart of Gold. Harley, the love interest, was a Good Guy. I can’t honestly say that I liked them or even necessarily cared for them, because they all just felt very underdeveloped and one-dimensional.

There wasn’t a lot of romance in this book, but what’s there is unfortunately guilty of insta-love. Harley was around for maybe only 30% of the book: a little at the beginning, and a little at the end. The reason behind his absence was later explained, but I don’t believe it made any sense at all. For the record, [spoiler] he disappeared because felt like he should give Grace some space after Ben died, something that I don’t think makes sense because if someone is having a hard time, well, the natural thing to do wouldn’t be to avoid them [/end spoiler]. Honestly, at this point I think the book is better without romance at all.

“Everyone has their own truth, Grace, and that means illusion and reality are sometimes impossible to distinguish.”

My feelings about Breathing Under Water, overall, can be summed up in one word: disconnected. I just didn’t get a good grip on any of the characters, I didn’t get a good sense of the plot, and even now I wasn’t sure what the message of the story was. I pretty much spent most of my time kind of breezing through, trying to find a thread I can hold on to, and unfortunately I didn’t find anything, so it ended up feeling largely lacking to me.

* I received an ARC of this book from the publisher via NetGalley. This in no way swayed my opinion of the book.