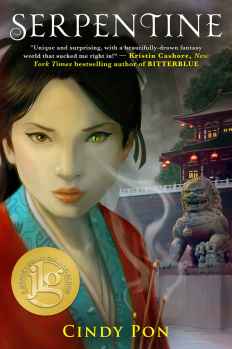 Title: Serpentine (2015)
Author: Cindy Pon
Genre: Young Adult, Fantasy
Extent: 300 pages
Rating:★★★★☆
Review: When I read the summary for this book, I knew I had to read it. I come from a Chinese family, and Chinese mythology is superbly close to my heart. Books inspired by Asian mythology have failed me before, however, so I treaded warily into this one.

I was not disappointed. I was, in fact, very pleasantly surprised by how much detail Pon weaved into the setting and how authentic it all felt. This might just be me, but I sometimes read books where the author was trying to sell a different, often Asian-sounding setting, only for me to discover that it was literally just another Western setting with an Asian-sounding name. Naturally, those books were usually disappointing, at least insofar as setting or world-building goes.

So when Pon presented me with an intricately imagined, authentically Asian setting, down to the very small detail? I was impressed. And I was impressed, too, by how much that actually aided the plot instead of detracted from it. Many books focus too much on one or the other, plot or setting, but Serpentine offers a nice, refreshing blend of the two that they work together instead of against each other.

Pon’s characters, particularly the women, were completely believable, too—something I love to see in YA fiction. Skybright is fiercely independent, with a natural curiosity about her own background. I love that she worked really hard to understand herself, that she owned up to her emotions and yet still tried to put the people she loved first. Zhen Ni is a spoiled princess with a big heart, a lot more caring than what you would expect a girl of her standing to be. Lady Yuan is the quintessential Chinese mother: tough and traditional, yet she actually only wants the best for her daughter. These characters are realistic, with their own dreams, wants, fears, worries, strengths and flaws, and that’s absolutely superb to see.

The romance between Skybright and Kai Sen was alright; a little lacking, perhaps, and a little too fast-paced at the beginning, but there were enough of other things to focus on, so I didn’t mind it and even enjoyed it. I’m also actually more interested in Zhen Ni and Lan—girls who like girls are still not that widespread in YA fiction, especially as major, plot-driving side characters, and I love that this particular relationship was treated with sensitivity and respect. Major props to Pon.

One of the things that I noticed was that Pon would call some of her characters with their English names (e.g. Skybright, Stone, Pearl, Rose) but others with their Chinese names (Zhen Ni, Lan, Lady Yuan). I thought of this as inconsistent, but my cousin pointed out that some Chinese names just don’t have exact translations, which might be why Pon decided to just go ahead with both English and Chinese names. I could get by that idea.

The ending was a cliffhanger or a bittersweet one, depending on how you want to look at it. I plan to read the next in the series when it comes out, and I hope that one is every bit as good as this one, too.